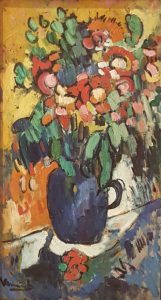 It might be a stretch to link some tips on budgeting which appeared in the New York Times this week, to our terms topic of copying a work by an artist we enjoy.

However, it was their advice to have a mindfulness approach to simply noticing and acknowledging each time one spent money which resonated with me.

And made me realise that looking at art is very much a mindfulness exercise.

Well, I mean, it should be.

And often it is not.

I texted a still life from Madrid, by Vlaminck, to a friend recently. I was simply enjoying the rawness and directness of this work., she was working in still life and I thought I would share the painting with her

And I was interested when she said, by way of response, that she didn’t like Vlaminck much.

And it reminded me how much we seem to think we have to have an opinion or take a position on things.

Rather than just observing and being open to something we feel we must decide there and then whether we LIKE it or not.

And this has the effect of once having made that decision it’s as if the thing is now closed to us.

I would like to suggest that we keep mindful ESPECIALLY with works that jar with us, because as Rilke said you must keep aligned to the most difficult things in your life because that’s where you will learn the most

In the budgeting article, it suggested that instead of beating oneself up about over spending yet again, one just commented” oh, I just spent $50.00 on plants, isn’t that interesting”.

And in this way one could develop an awareness of how and where we spent money., whereas before it seemed to happen beyond our control (seemingly)

So, I would like us to go into this term, with no preconceptions of what we will find.

Which artists we will like or not, rather that we maintain the “isn’t that interesting” mantra especially with works that we would’ve otherwise dismissed.as George Saunders says “Keep so open it hurts” and this applies right across the creative process